Cycling to Paanchpokhari, Two Women on an “Isolation” Travel to Panchpokhari during Corona Crisis in Monsoon One recent early morning, Sony suddenly had an instant plan to break out and go on a solo bicycle trip. This came as a surprise to me, with my focus aimed at my online classes. But, just like how she was missing travel, so was I. Early morning all set to leave for Panchpokhari from Kathmandu

Then and there we started our sudden plan for a bicycle trip to Panchpokhari. We agreed on travelling together and managed everything we needed on that same day. The next day we left for a 6 day long bicycle trip to Panchpokhari. But this time it was going to be a different kind of travel, “Isolation Travel.” During this monotonous life due to pandemic, we never thought it could be this magical amid covid19 scare and rainy season.

What could be one’s thought before such trip in the middle of this chaos? Well, we were prepared for the consequences. From being caught by district police to being chased by the locals. It wasn’t the easiest of decisions to make but having a partner with positive mentality motivated me.

Tent, sleeping bag, mat, dry bags, kitchen items, a pair of extra clothes and slippers, first aid kit, food rich with protein and sugar. These were the essentials we carried for our isolation travel. However, when one’s travelling by bicycle with heavy loads on it, all the essentials should be kept to minimum and bag packing should be most trustworthy.

We hopped into a dubious journey to Panchpokhari with our weapons. Medical masks and sanitizer at the ready. We spent our first night in Kafley Khola, Melamchi (49 km from Kathmandu via Sankhu). People were stoked to see us, almost all of them called us ‘bhai’ (brother) on the way. I wanted to shout back “not only men travel on bike” everytime, but I chose to reply “Namaste! sanchai hununcha (Hello, how are you doing?)” instead, making them realize that not only men travel on bike.

Two local women came to our tent at two different times and insisted us to stay at their place as they were afraid for us. We hadn’t expected that someone would offer a stay at their place amid the pandemic. With a sensation of happiness deep inside, we denied their requests politely. As we were staying in a tent, and had to primarily depend on our carried food, consumption was a major focus. We boiled eggs, grains and local milk. Keeping things to a minimum and eating just what our body needed made us realize the overeating nature of human kind and how privileged we are. Every bite was precious that day. We slept with just a mat beneath us and not for a single second did my bedding back in Kathmandu come to mind. A complete realization occurred, that all we need is a peaceful mind and a tired body for restoration, sound sleep. Hiking and Biking
(On the way between Melamchi and Chhimdi)

We stayed at Chhimdi the next day. The route from Kafley khola to Chhimdi, I tell you, was the toughest. Having to drag our bikes through the mucky road not just drained the energy out of us, but also degraded the functioning of our bikes. Our persistence was tested to its threshold by the steep road that curled through the hills and passed across shallow streams. I can’t distinctly tell if we actually rode or hiked that day. Journeys are filled with roughness mixed with joyous moments. Nepali month of Asar is considered as the most important month agriculturally, as it is the month of rainfall. On the way we saw people enjoying and singing while planting rice in their fields as if it was a festival. They paused for a while with their muddy faces, staring at us until we passed the next corner. Some of them clapped from down the road, while some waved from terraces above. Did we really think that locals would chase us away? Dropping our bikes at Chimdi, we hiked the remaining trail. After being welcomed by breathtaking waterfalls, hills and getting recharged with ‘Makai Jhaikattey’ (Fermented maize) at Tuppi Dada, we reached Maljyangmu where we spent our third day. Guess what? We found a goth (shed) with few grains and potatoes inside. Sony and I had a serious discussion over whether or not to use the grains and potatoes. But our empty stomachs concluded that the food was left behind for our use and took them with both our hands. Sony made the fire and I fetched water. After struggling for 3 hours of cooking with wet wood, we ended up eating the ugliest looking, yet tastiest of food.

When we finally reached our destination on the fourth day aftr hiking for about 4 hours, Panchpokhari was hiding inside heavy fog. We had struggled reaching this point, but instead of throwing ourselves to the ground, we were lured into completing a Kora around the lakes and found our energy. As my heartbeat gained its momentum my cerebrum played a tranquil tune. How can Nature be this magically swaying? Waking up the next day by the shock and beauty of the clear view, we hiked to the nearby tower. Here, hid the surprises. From the tower we could see the magical range of the Himalayas to the north and five mesmerizing lakes on the south. I don’t know how, but some kind of current passed inside my body. I went to the edge of the stone and embraced every atomic breeze. I was completely driven away, my heart had no control over it. I was paused. Destinations are beautiful but I tell you, journeys are the most cherished. Foggy wilderness, mild rainfall, chirping birds, overflowing tones of rivers, what can one be more satisfied about? Sony and I would stop a while on our way and stare at the foggy hills, trying to focus on something, may be ourselves. How’s life with complete contentment? Sony and I even enjoyed playing with leeches in the beginning of the trip. Sony was enjoying it the most. She even asked me if I would like to play a “leech game” in which, the one with the fattest leech would win. But she started cutting the leeches with her knife after being fed up with it. Not just leeches make monsoon risky to travel. We had to pass numerous landslides. I even broke my spd shoes… bicycle shoes aren’t meant for hiking. The roads were the worst, we call them “adventurous roads.” Due to this pandemic, having seen the travelling culture declining, I see “Isolation Travel” as a new way of travel. It’s easy if one is mindful and takes necessary precautions. Moreover, this isolation travel actually provided us with an opportunity to learn survival skills. It also made us realize our over consumption pattern after having to hike the whole trip with one meal a day. Still we had strong feelings of gratitude and contentment.

We returned back to Kathmandu in 2 days, the sense of accomplishment and pride filled us up as we marched each step towards the valley. We challenged the odds in this monsoon season and pandemic times, and completed a hardcore trip which brought to us new vigor and vitality.

Some more Photos from the Trip! 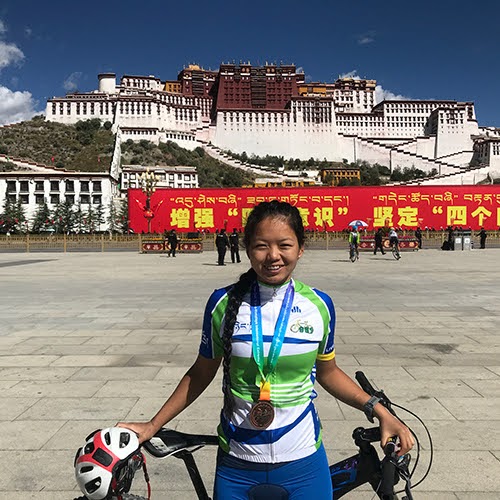 Anisha is a social work student and a national cyclist of Nepal who is also passionate about traveling and writing.