Our trip to Gosaikunda was as much adventurous as it was religious. We chose Gosaikunda as it was the nearest destination from Kathmandu but also well known for the beautiful Langtang mountain ranges and of course the frozen lake – Gosaikunda. There’s a saying “If we spend enough time dreaming,  the dream might eventually become real”. I had been wishing to go to Gosaikunda for a long time and it was coming true. We were planning to start our trek on the first week of March amidst the global pandemic – COVID19. Just two weeks ago, two trekkers had lost their lives in an accident on their way back from Gosainkunda. Naturally, we were a little anxious. I had a little fear inside me but I wanted to challenge myself. Born and raised in the Terai region, I didn’t have any experience on high altitude and freezing temperatures. This was going to be a once in a lifetime experience for me. In Cholangpati with Mt. Langtang in the background

Our journey started on March 7, 7 A.M. from Machhapokhari, Kathmandu (1,400 meters). Nine hours long bus ride and 117 kilometers later, we reached Dhunche (2,030 meters) from where our trek to Gosaikunda began. First, we had to descend to Ghatte Khola (1,960 meters). It was already 4:41 P.M. when we reached there. I was not used to such terrain and it was already proving tough for me. We had to take frequent breaks to catch breath along the way. Finally, we reached our first stop for the first day – Deurali (2,625 meters) at around 6:29 P.M. We stayed at Deurali Hotel and Lodge for the night. We were hungry but we couldn’t resist the view. We were surrounded by mountains all around, beautiful mountains covered with a thick blanket of snow. We had our dinner at 8 P.M. and then went to sleep.

Snow Covered Mountains around Gosainkunda as seen from Dhimsa.

The next day around 5:35 A.M. we continued our trek from Deurali. The path was covered with snow which made our journey even harder.

We reached Dhimsa (3,100 meters) by 6:40 A.M. We had a quick breakfast and had some spare time to take photos along the way. As we moved on, the path was getting even more steep and slippery. We took several breaks to capture the beautiful scenery, exotic flora, and fauna. On the way to Cholangpati.

After two long hours, we reached a small yet beautiful village Sing Gompa (3,300 meters). There were a few lodges, a beautiful monastery, and a cheese factory. We continued our journey to Cholangpati (3,600 meters).

The path was the easiest one as it was flat and surrounded by conifer trees. We reached Cholangpati at 9:07 A.M. and there we were blessed by a spectacular view of Langtang mountain range. Without much lingering, we headed to our next stop Lauribinayak (3,900 meters). The path was difficult as it was steep and covered in snow. By 11:08 A.M., we reached Lauribinayak. We had a short break for some fruits and snacks. Our next stop was the Buddha Mandir (4,200 meters). It was the most difficult part of our journey because of high altitude, lack of oxygen and slippery snowy paths . We were completely exhausted by the time we reached Buddha Mandir. We were yet to reach our final destination Gosaikunda (4,380 meters). The trail was getting harder. Narrow carved paths with snow were very dangerous. We were treading very cautiously. By 4 P.M. , we finally reached Gosaikunda. I got a very bad headache from a full day of trekking and altitude sickness. After an early dinner at 4:30 P.M. and some medicine, I went to bed. Fortunately, my headache was gone the next day. We visited the Gosaikunda lake which was completely frozen. We mustered our courage and went into the middle of the frozen lake. We were walking over the thin sheet of ice above water. Moments later, we were hitting each other with a snowball. It was like playing Holi with snow. We also visited the temple near the lake. We then took a short break to cherish the moment and take-in the majestic view of magnificent mountains. One of my friends Saroj Raj Sharma went to Gosaikunda View Point to observe the Nepal-China border while I was busy exploring the surrounding of Gosaikunda. I found out that a lot of pilgrims visited Gosaikunda by helicopter. But by my experience, I can tell you that trekking here is so much more worth it. Time had come to say goodbye to the most beautiful place I had ever visited in my life. We left Gosaikunda at 9:40 A.M. The trails felt gentler as we were descending. Maybe we had gained some sort of spiritual energy after visiting Gosaikunda, we reached Buddha Mandir in just an hour. We took a short break to take one last look at the majestic mountain ranges. We were at Lauribinayak by 10:54 A.M. Without wasting any time we continued to Cholangpati. The descent was much easy for me. I even overtook my friends who left earlier than me from Gosaikunda. Mt. Langtang as seen from Cholangpati.

We reached Cholangpati at around 12:25 P.M. We had some fruit and water. Re-energized and replenished, we resumed our descent. The snow had melted in a lot of places. We had no problems of slippery paths. We reached Sing Gompa by 1:36 P.M. and we were quite hungry. We had to wait for about an hour for our lunch. After lunch, we reached Dhimsa by 3:08 P.M., Deurali by 4:03 P.M., Mini Gosaikunda by 5:54 P.M. and then finally Dhunche by 7:02 P.M.

Some more shots from the trip. (Included price are per person) 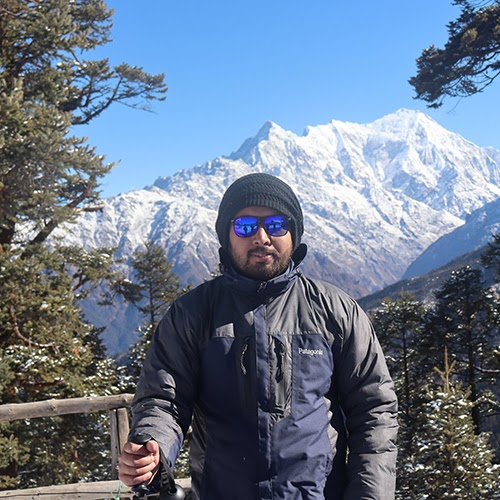 I’m Ujjawal Poudel from Morang, Nepal. I am a dedicated person with a family of four. My strengths are my attitude that I like to take challenges that I can do it, self-motivated person, self-disciplined. I enjoy exploring new places and finding ways that help me. I enjoy reading, and the knowledge and perspective that my reading gives me. I completed my Bachelor in Computer Engineering in 2018 A.D. from I.O.E, Dharan and currently work as Software Developer at Roosterlogic Pvt Ltd, Kathmandu.